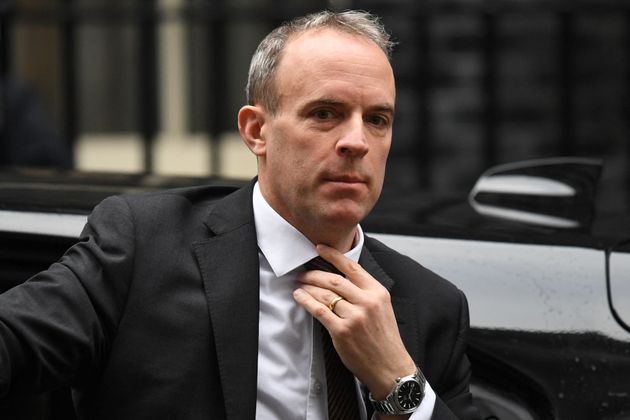 Dominic Raab has denied the Foreign Office put the welfare of animals above people in its evacuation of Kabul following whistleblower claims that Afghans were “left to die”.

The justice secretary, who was foreign secretary at the time, is facing questions over his handling of the evacuation following evidence from former diplomat Raphael Marshall, who said that only five per cent of those who applied to leave the capital received any assistance.

Among the accusations levelled at Raab was that he “did not fully understand the situation” and demanded that evacuation claims be ordered in a better spreadsheet.

During the fall of Kabul to the Taliban the Foreign Office came under fire for evacuating around 150 dogs in Pen Farthing’s Nowzad animal shelter while people who helped the UK with its mission in Afghanistan struggled to get out.

Asked on Sky News about the claims that Boris Johnson asked for “considerable capacity” to be used to get a charity’s dogs out of the country,  Raab said: “That’s just not accurate. We did not put the welfare of animals above individuals.”

And on the claims that Raab demanded that evacuation applications be collated in a spreadsheet, he replied: “This is not correct.”

Raab, who was criticised for being on holiday as Kabul fell, went on to say that the Foreign Office did “everything we could” to get people out of the capital.

He said 15,000 people were evacuated in two weeks, which he called the “biggest operation in living memory”.

And he repeatedly blamed “extremely difficult conditions on the ground” for any delays, saying there was a need to conduct “basic checks” on those seeking to leave to ensure the Foreign Office did not allow anyone who might threaten the UK to leave the country.

Marshall’s claims come in the form of evidence published by the Foreign Affairs Select Committee on Tuesday.

The whistleblower — who Raab said was “relatively junior” — exposed a short-hours culture that led to “people being left to die at the hands of the Taliban”.

He said at one point he was the only person monitoring an inbox where pleas for help were directed.

Emails were opened but not actioned, and he felt “the purpose of this system was to allow the prime minister and the then foreign secretary to inform MPs that there were no unread emails”.

He said: “These emails were desperate and urgent. I was struck by many titles including phrases such as ‘please save my children’.”

He added: “The contrast between Her Majesty’s Government’s statements about a changed Taliban and the large number of highly credible allegations of very grave human rights abuses HMG has received by email is striking.”

Marshall worked in the Afghan Special Cases team, which handled the cases of Afghans who were at risk because of their links with the UK, but who did not work directly for the UK government.

He estimated that “between 75,000 and 150,000 people (including dependants) applied for evacuation” to the team under the leave outside the rules (LOTR) category.

And he estimated that “fewer than 5% of these people have received any assistance” and states that “it is clear that some of those left behind have since been murdered by the Taliban”.

He said that no member of the team working on these cases had “studied Afghanistan, worked on Afghanistan previously, or had a detailed knowledge of Afghanistan”.

He said junior officials were “scared by being asked to make hundreds of life and death decisions about which they knew nothing”.

Raab also said he did not believe he was demoted from his former role as foreign secretary over the Afghanistan evacuation effort.

Asked on Sky News why he thought he lost that role, Raab, who was moved to Justice Secretary, said: “Those are decisions for the prime minister, but I am pretty confident from what he said to me that it wasn’t in relation to Afghanistan.”

It comes as FCDO officials and the ambassador to Afghanistan, Sir Laurie Bristow, are due to give evidence to the committee on Tuesday.

Marshall’s written evidence is due to be published by the committee on Tuesday, and its chairman, Conservative MP Tom Tugendhat, said the “failures betrayed our friends and allies and squandered decades of British and Nato effort”.

He said it painted the evacuation as “one of lack of interest, and bureaucracy over humanity”.

Tugendhat said: “These allegations are serious and go to the heart of the failures of leadership around the Afghan disaster, which we have seen throughout this inquiry.

“These failures betrayed our friends and allies and squandered decades of British and Nato effort. The evidence we’ve heard alleges dysfunction within the Foreign, Commonwealth and Development Office and substantial failings throughout the Afghanistan evacuation effort.

“The evacuation has been described as a success by some, but these allegations point to a very different story – one of lack of interest, and bureaucracy over humanity. It proved to be a true test of the leadership and effectiveness of the Foreign Office, with the lives of many of our friends and allies in the balance.

Is Succession Plotting Its End?