New Christmas Songs For 2021: Our Verdict 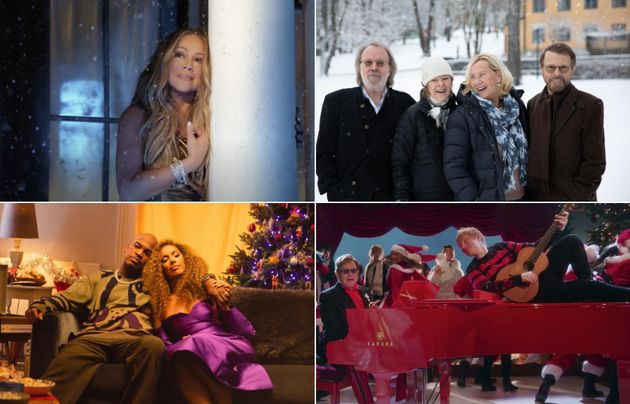 Pop fans have been well and truly spoilt this December, with an array of early Christmas presents in the form of brand new festive tunes from a range of A-list acts.

ABBA have unveiled the first Christmas offering in their almost 50-year career, while Ed Sheeran and Elton John have teamed up to dominate the airwaves this festive season with a brand new duet. And, of course, the self-professed Queen of Christmas – Mariah Carey – is back, too.

There were a number of odd things to observe about ABBA’s first album in 40 years when it was released in November – the inclusion of a Celtic folk-inspired song, the emotional ballad about the breakdown of a marriage told from the perspective of the family dog and the fact there was a Christmas tune slap-bang in the middle of it all.

Well, in the lead-up to the festive season, it’s been announced that ABBA have decided to give their first ever Christmas song, Little Things, the full single treatment.

Given they’re now in their 70s, it’s not surprising that ABBA’s take on Christmas is laden with nostalgia and centred mostly around family celebrations (apart from one unusual line that does seem to allude to some Christmas morning “relations”, which we definitely were not expecting).

However, while their last seasonal offering Happy New Year was arguably among their most depressing songs ever (sample lyric: “seems to me now that the dreams we had before are all dead, nothing more than confetti on the floor”), Little Things is twee and saccharine to the extreme. And then, just when you feel like you’ve already downed an entire tub of Roses in one sitting, in comes the children’s choir. If that’s your bag, then this is definitely worth a listen, but those who prefer their ABBA with a bit more attitude, we’d maybe swerve Little Things.

Sample lyric: “Little things, like that happy noise, as a brand new day is dawning, on this lovely Christmas morning, it’s our children playing with their new toys.”

What, you really thought the self-professed Queen of Christmas was going to let 2021 go past without gifting us an early stocking-filler?

This year, she’s teamed up with singer-songwriter Khalid and choir leader Kirk Franklin for an R&B slow-jam about, as the title suggests, finding romance around Christmas.

Fall In Love At Christmas is more in line with her last studio album Caution than Mariah’s trademark festive tunes – including last year’s Oh Santa! remix with Ariana Grande and Jennifer Hudson – with the track seamlessly mixing old-school and modern R&B tropes with a few added sleigh bells for good measure.

And while we’ve seen a few reviews suggest this track isn’t as full of Christmas cheer as you might hope, it’s worth noting it does end with a breakdown sampling Hark! The Herald Angel sing, before a gorgeous gospel choir bring us home. It’s a different festive approach for Mariah, but we think it works.

Sample lyric: “And while the Northern Star lights the way, I dream of us, so let’s fall in love again this Christmas night.”

It’s Ed Sheeran! It’s Elton John! It’s Christmas! It’s… pretty much exactly what you’d expect from mixing those three components with pretty much every festive cliché you could shake a candy cane at. An abundance of bells? Check. A kids’ choir? Check. Lyrics about kissing under the mistletoe mixed with Ed’s usual go-tos about “dancing in the kitchen” while “embers glow”? Check, check, check.

Still, all signs point to this song being completely unescapable this December, so we’ve decided it’s probably best to just embrace it all – and we’ve added a point on for the actually-very-funny music video.

Sample lyric: “I know there’s been pain this year, but it’s time to let it go, next year, you never know, but for now, Merry Christmas”

First of all, we have to applaud Kelly Clarkson for giving us the most brilliantly-titled new festive song of 2021. And while pretty much every singer in the world has tried releasing their own Yuletide music at some stage, Kelly has done the unthinkable and actually managed to put her own spin on Christmas that hasn’t already been done to death.

Christmas Isn’t Canceled (Just You) sees Kelly singing from the perspective of a newly-single woman using the holidays to help put a recent break-up behind her.

Admittedly, it’s not exactly reinventing the wheel musically – the track showcases the horns, jingle bells and 1950s doo-wop style that’s proved successful for countless singers hoping to get listeners in the festive spirit in the past – but as Kelly has already proved on past offerings like Underneath The Tree and Wrapped In Red, this is an area she’s really convincing and at ease in.

The playful lyrics mixed with an unapologetic production and attitude in Kelly’s delivery actually put us a lot in mind of Katy Perry at her best, which has us even more convinced that 2022 should be the year the Roar singer tries her hand at a Christmas album of her own. Until then, we’ll definitely be giving Kelly’s new album, When Christmas Comes Around, a spin based on the strength of this lead single.

Sample lyric: “You ruined all my favourite things, but you won’t take Christmas from me, I’ll be hanging every light I find in this house, playin’ Christmas music so loud, this year Christmas won’t be quite so blue.”

One More Sleep has become an undeniable modern festive classic, and eight years on from its release, Leona Lewis is revisiting her Christmas, With Love album and giving fans a repackaged new version of the album.

The re-release includes two new tracks: a curious cover of the Bee Gees’ If I Can’t Have You (why not, eh?) and this romantic Christmas duet with Ne-Yo.

Kiss Me It’s Christmas centres around a couple who’ve been together for many years using the festive season to help put the spark back in their relationship and appreciate each other for the moment.

Leona and Ne-Yo’s voices sound lovely together, the lyrics will undoubtedly resonate with loads of couples around the festive season and the track itself definitely conjures up an atmosphere of Christmas romance. In fact, those who didn’t think Mariah’s latest offering was Christmassy enough might want to give this a try…

Sample lyric: “It’s a quarter to midnight so all those dishes can wait, we can’t let, just can’t let that mistletoe go to waste, oh darling, just kiss me, it’s Christmas.”

Gary Barlow – The Dream Of Christmas

We don’t really have much to say about The Dream Of Christmas, in all honesty. If we tell you it’s a Christmas piano ballad, written by Gary Barlow, you can pretty much imagine exactly how it all unfolds before you’ve even hit play.

The Dream Of Christmas is a nice enough song, and if it came on as background music on somebody’s festive playlist, we definitely wouldn’t be begging them to skip it or anything. But also, it’s not one we could ever imagine anyone outside of Gary’s existing fanbase wanting to hear more than once.

Lyrically, there are some sweet lines about how the festive season provides us all with some much-needed cheer at the height of the winter, but where the song doesn’t really go anywhere, that message gets a bit lost along the way.

Sample lyric: “The darkest sky Illuminates, not too long now for us to wait, through smoky clouds and drying tears, the Christmas sun appears”

We’ll be honest, we’ve had RuPaul’s solo version of Hey Sis, It’s Christmas in pretty heavy rotation around this time of year since its release back in 2018, so when we heard it was being used as the rumix for the season three finale of Drag Race UK, we were happy it was going to get its moment in the spotlight.

It’s a known fact among Drag Race fans that those finalist rumixes can be a bit of a mixed bag… so is this new version of Hey Sis, It’s Christmas more of a Read U Wrote U or a Superqueen? Well, we have to admit, we’re sold on this one.

Disappointingly, some of RuPaul’s ridiculous lyrics from the original have been cut (“Christmas Carol, she in the back, look at her working with all of that”), but for the most part, the final three understood the assignment when it came to throwing a bit of tinsel around Hey Sis, It’s Christmas.

Sample lyric: “Old Saint Nick, I’m gonna climb you like a tree, don’t need no gifts, I’m here to win the crown, Santa, baby, come on pull my knickers down”

When we first heard Craig Revel Horwood had teamed up with Strictly singer Rietta Austin for a sax-heavy throwback Christmas ditty we originally thought we might have hit the egg nog a bit too hard… and that was not a feeling that went away after we actually listened to it.

Admittedly, we wouldn’t go as far as saying it’s a total “disarrrrster, darling”, but it has to be said it’s a bit of a racket. While fans of the slew of festive tunes that came out in the 1980s might enjoy the nostalgia, It’s Christmas, Merry Christmas! doesn’t exactly have the replay factor of some of the other new songs released this December. 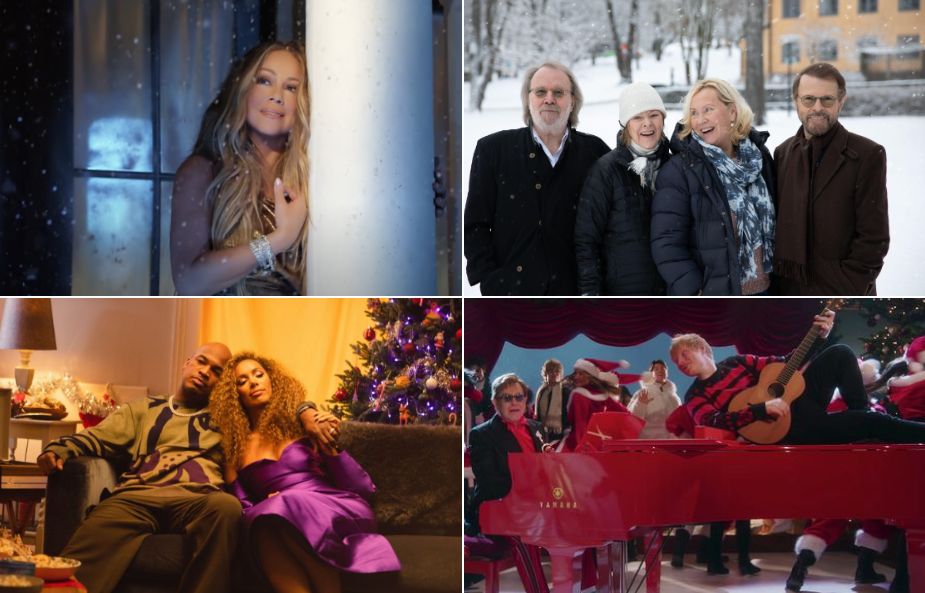 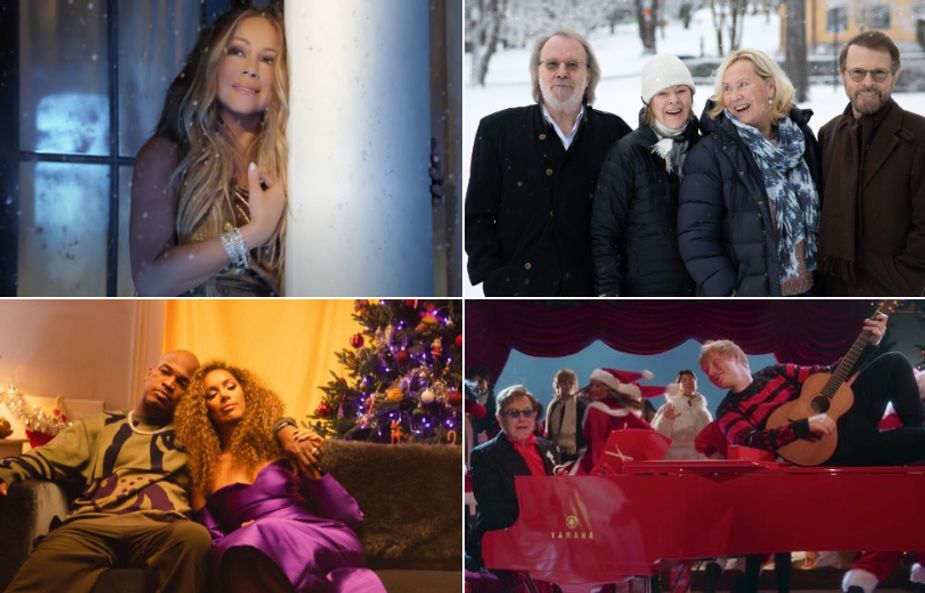 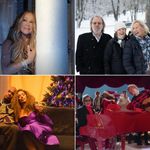 Naughty Boy Is Fourth Star To Leave I’m A Celebrity… Get Me Out Of Here!

‘One Rule For Them’: What The Papers Say About Boris Johnson’s Plan B