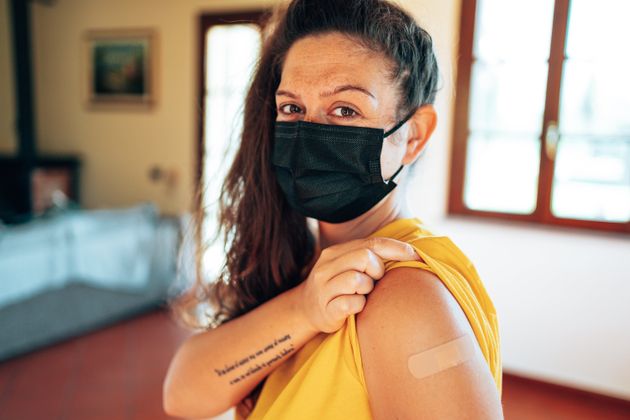 The Pfizer vaccine does offer some protection against the Omicron variant of coronavirus, according to new research, but it may not be as effective as it was against previous strains.

The research comes as the government has implemented its ‘Plan B’ in the fight against Omicron, with new coronavirus restrictions announced.

It follows early studies that suggest the new variant may be more transmissible than the original strain, and potentially also more infectious than the Delta strain.

A key feature of the Omicron variant is that it has a higher number of mutations than previous strains, 30 of which are on the spike protein. This is significant, because spike proteins are instrumental in how the vaccines work.

“When the immune system comes across these tiny spikes, it recognises them as foreign and creates antibodies. These antibodies have an important role in fighting viruses as they bind to the spike proteins and may prevent the virus from infecting cells,” Imperial College London explains. “This process also creates a lasting memory of the spikes so that the body ever comes across them again, it will recognise them and be able to mount a quick response.”

Because of this, there’s been widespread concern that the variant made evade the protection we’ve already gained

But the good news is, research so far suggests the vaccines do offer some protection – just not as much as we might have hoped. Here’s what we know so far.

The Pfizer vaccine works, but you’ll need a booster

Three doses of the Pfizer/BioNTech Covid-19 vaccine appears to neutralise the new Omicron variant, according to new preliminary studies by the makers.

Pfizer and BioNTech said the antibody levels reached with three doses of the vaccine were just as good as for two doses against the original Wuhan strain of the virus, which have already been shown to offer high levels of protection.

However, laboratory work found that two doses of the vaccine resulted in a “significantly reduced effectiveness against Omicron”, suggesting people can still get infected with the variant. It means getting your booster jab is vitally important.

The researchers noted a 25-fold reduction in the blood’s ability to neutralise Omicron after two doses compared to the original strain. However, the variant did not evade the vaccine’s protection completely.

In positive news, the firms said two jabs are still expected to work against severe disease, owing to how the body uses a range of immune cells, including T cells, for protection.

Eleanor Riley, professor of immunology and infectious disease at the University of Edinburgh, called the latest research “reassuring”.

“The message is clear: if we want to control virus transmission and avoid further restrictions, we need everyone who hasn’t yet done so to get vaccinated and to get their booster,” she added.

It’s worth noting that the early studies from Pfizer and BioNTech on the Omicron variant are fairly small, involving around 20 people, and research is ongoing.

Data is not yet available for the other vaccine brands in relation to Omicron.

Results are “better than expected”

The scientists involved concluded that the Omicron variant can somewhat evade the Pfizer jab. However, Professor Alex Sigal, a virologist at the Africa Health Research Institute, who led the research, tweeted a link to the research with optimism.

He confirmed that the variant escape from the vaccine was “incomplete”, and told his followers: “Just be be clear on something […] this was better than I expected of Omicron.”

Following the research, Dr Mike Ryan, from the World Health Organisation, told the AFP news agency: “We have highly effective vaccines that have proved effective against all the variants so far, in terms of severe disease and hospitalisation, and there’s no reason to expect that it wouldn’t be so [for Omicron].”

In the immediate future, the UK is ramping up its booster jab programme. Those over the age of 40 can now get their booster jab, with younger age groups expected to get the official call up shortly. Some walk-in centres are already offering boosters to younger groups where spare jabs are available.

During the Downing Street briefing on December 8, the UK’s chief scientific adviser Sir Patrick Vallance and England’s chief medical officer Professor Chris Whitty said coronavirus vaccines may be reformulated in the future to protect people against the Omicron variant. However, they added that time is being taken first to assess the effectiveness of boosters.

Vallance told journalists: “I think the vaccines are going to hold up to some extent here, I think probably boosters will really push that to a level that’s going to be important, we need to test that and find out. I don’t think it’s a harbinger of what happens hereafter.

Prof. Whitty added that we are “immeasurably better off” at fighting coronavirus due to the vaccines, drugs and hospital treatment compared to a year ago, and at “no point” did scientists say there would not be new variants – or significant ones – which evade vaccines.

He said: “I think in the long run the outlook is good, but we have to accept there is still a difficult period.

“In terms of this particular variant, the question I think is really going to be, ‘Is this held by the current vaccines with boosters?’ Or are we actually going to have to do a reformulation of the vaccine at least [for] more vulnerable people and that’s what we will need to do over time?”

He added: “It may be what we have is a transition period where the booster holds it for a bit, and that buys us time, and then we can actually get a specific, or what’s called polyvalent vaccine, and that will allow us then to, from later on in this year, be able to respond to it directly.”

Okay, But Will Plan B Actually Work? Here’s What The Experts Say