A government department has faced mockery after deciding to promote an anti-corruption campaign on the day Boris Johnson’s administration was mired in multiple controversies.

A Labour MP accused the Cabinet Office of “gaslighting” as a tweet urging people to “stand up against corruption” went viral.

The message said: “On anti-corruption day and everyday, we, as partners and allies, want to empower individuals to stand up against corruption and promote transparency. Democracy enables us to hold each other to account, at home and abroad.

“Democracy enables us to hold each other to account, at home and abroad.”

On anti-corruption day and everyday, we, as partners and allies, want to empower individuals to stand up against corruption and promote transparency.

Democracy enables us to hold each other to account, at home and abroad. #IACD2021#DemocracyAllieshttps://t.co/bSkQGP434Dpic.twitter.com/NOuAU1S4ab

It came on the same day as the UK government was fending off attacks from all angles.

Johnson is facing questions over whether he misled an investigation into donations for refurbishments to his Downing Street flat after a watchdog fined the Tories £17,800.

The Electoral Commission issued the fine after ruling that the Conservative Party had not followed the law over donations by Lord Brownlow to help cover the renovations, with costs exceeding £112,500.

But its report raised further questions because it discussed evidence showing Johnson had sent the peer a WhatsApp message in November 2020 “asking him to authorise further, at that stage unspecified, refurbishment works on the residence”, to which he agreed.

Labour has accused the PM of having “lied” but No 10 insisted Johnson had been honest and followed the rules “at all times”.

Meanwhile, the probe into alleged Covid rule-busting parties in government has been widened to include another festive celebration and a reported staff leaving do.

MPs were told on Thursday that an investigation into reports of a staff Christmas bash at Downing Street on December 18 2020 – which saw a Johnson aide quit following leaked footage showing officials joking about an event – will now include two other alleged events.

The juxtaposition of alleged lockdown parties in Whitehall and the public being urged to follow ‘Plan B’ Covid restrictions led to Johnson being savaged on the front page of most newspapers.

Government ministers have said repeatedly that the rules were followed.

The latest rows come hard on the heel of weeks of claims over “Tory sleaze”, including “favouritism” in the award of £17bn in Covid contracts and Conservative attempts to avoid a 30-day suspension for Conservative MP Owen Paterson, and the subsequent fall-out over second jobs.

It was all too much for many on social media.

Would love to buy the civil servant who cheerfully sent this tweet this afternoon a pint https://t.co/iWavPQabKC

I think this is also known as gaslighting!

I've said it before and I'll say it again under this corrupt government our democracy is being eroded. https://t.co/7wcNavhSw5

Comedy is all about timing https://t.co/6Ft5vOt6PP

Just at the tail end of "Crime Week", too. pic.twitter.com/kpjoPWjWjc

April fools has come early for the @cabinetofficeuk. Imagine the poor comms person who actually had to put that out. Must be mortified. https://t.co/CQHPRGul8I

“To stand up against corruption and promote transparency” – are you shitting me? https://t.co/tim3kfNwYI 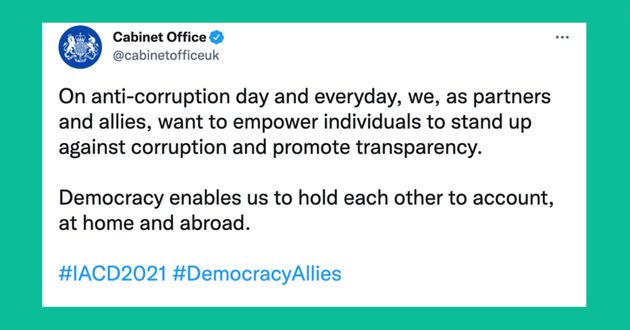