The Met Confirmed It Won’t Be Investigating No.10’s Alleged Party And People Were Outraged 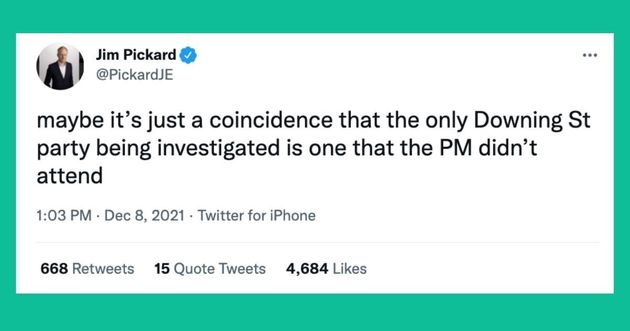 The Metropolitan Police announced that it would not be investigating Downing Street’s alleged Christmas party last year – even though it would have breached lockdown rules – and people aren’t happy.

In a statement released on Wednesday, the Met admitted they “received a significant amount of correspondence relating to allegations reported in the media” about a breach of lockdown rules at No.10 in both November and December last year.

Referring to ITV’s leaked video of Boris Johnson’s former adviser Allegra Stratton laughing over having a party while the rest of the country was in lockdown, the statement continued: “All the correspondence has been considered by detectives in detail, as well as footage published by ITV News.”

The Met added: “The correspondence and footage does not provide evidence of a breach fo the Health Protection Regulations, but restates allegations made in the media.

“Based on the absence of evidence and in line with our policy not to investigate retrospective breaches of such regulations, the Met will not commence an investigation at this time.”

The Met said it had also spoken to the Cabinet Office about a government inquiry into the party, and added: “If any evidence is found as a result of that investigation, it will be passed to the Met for further consideration.”

It’s worth noting that the policing minister Kit Malthouse was not even able to say whether or not the Met should investigate the alleged party on Monday as well.

There has been a public outcry since the reports about a No.10 party first came to light last week – so this news from the Met did not exactly soothe people.

Some people hit out by claiming the Met investigate other people who breached lockdown rules, so why not Downing Street?

The Met Police have charged some of the most powerless people for breaking lockdown rules, and now won’t even investigate the most powerful people when the whole country knows they broke the rules https://t.co/O1Aqj9xcTV

Others wondered what kind of evidence the Met wanted before they felt they could conduct an investigation.

WHAT absence of evidence?

Every bloody person going onto that street has to sign in and HAVE A PURPOSE FOR BEING THERE.

@metpoliceuk So video footage of senior Downing Street staff joking about the Christmas party they went to, admitting “there was no social distancing” is not evidence of them going to a Christmas party ???

So that’s police investigation these days is it? Nothing has landed in our lap yet that proves a party took place….jeezaloo

Weird how the @metpoliceuk keeps finding reasons not to do its job when it comes to the Conservatives, whether it is the corrupt funding of Jennifer Acuri, or illegal parties.