Nicola Sturgeon Tells Scots To Only Mix In Households Of Three 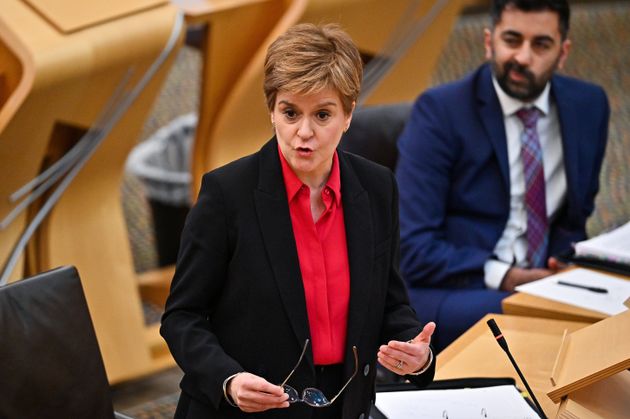 Nicola Sturgeon has urged Scots to only mix in households of three in the run-up to Christmas and its aftermath.

The first minister’s guidance comes amid increasing alarm in the UK at the spread of the Omicron variant of coronavirus, which scientists on Monday estimated could be infecting 200,000 people a day.

Sturgeon stressed that she was not asking anyone to “cancel Christmas” or to limit the size of household gatherings on Christmas Day itself.

But she said her “key request” was for people to limit their socialising with others “as much as you can” during the festive period.

Setting out the guidance, Sturgeon said: “Turning to Christmas Day specifically, or Christmas Eve or Boxing Day or whenever you have your main family celebration, we are not asking you to cancel or change your plans, and we are not proposing limits on the size of household gatherings.

“My key request today is this: before and immediately after Christmas, please minimise your social mixing with other households as much as you can.

“However, if you do plan on socialising, either at home or in indoor public places, we are asking that you limit the number of households represented in your group to a maximum of three.

“And make sure you test before you go.”

The advice to limit social gatherings to a maximum of three households will not be enforceable in law.

However, Sturgeon revealed that allowing staff to work from home where possible would again become a legal duty on employers.

The first minister also announced the return of restrictions for businesses, including social distancing and table service in bars — despite no new funding being announced by central government. “Our public health response is curtailed by lack of finance,” she said.

“There are further steps we could and would have considered today, particularly around hospitality, had we the financial ability to do so. But we don’t.

“However, I can confirm that with some considerable difficulty, we have managed to identify within our own resources around £100 million that we will use to help businesses, mainly those in hospitality and food supply, affected by our advice last week on work Christmas parties and further affected by what I have said today.”

Sturgeon’s announcement comes as Boris Johnson faces a possible Tory rebellion of around 70 of his MPs when the government puts its Plan B measures before parliament later on Tuesday.

The restrictions include mandatory masks in most indoor settings as well as guidance to work from home.

The most contentious measure is to enforce covid passports of either a double vaccination or negative lateral flow test for some high-risk events, which a number of Tories have publicly spoken against.