As Omicron Spreads, How Many People Can We Safely Mix With? 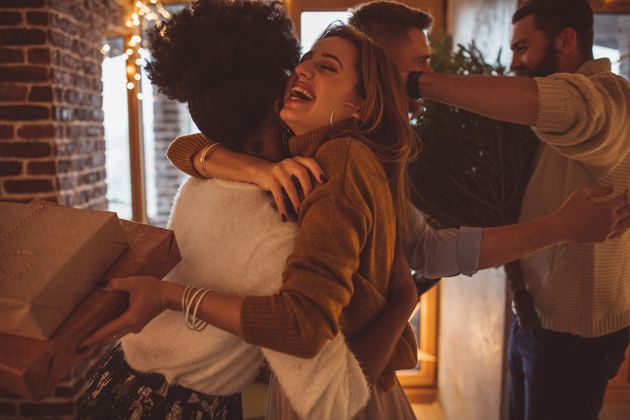 Nicola Sturgeon has urged people across Scotland to limit their socialising to three households before and after Christmas to help combat the “exponential” rise of the Omicron coronavirus variant.

Although the measures are guidance and not legally mandated, if you’re reading from elsewhere in the UK, you might be wondering if it’s time to start cancelling festive plans, too.

Our diaries tend to be packed this time of the year, as friends and family hope to enjoy seasonal meet-ups. But there are now more than 5,000 confirmed cases of Omicron in England alone – and cases are rapidly rising.

So, how many people should we be socialising with?

Professor Lawrence Young, a virologist and professor of molecular oncology at the University of Warwick, thinks limiting the size of gatherings is “good advice” and that “the guidance in Scotland is very sensible”.

“I think that we need much clearer messaging about other protective measures alongside the booster campaign,” he tells HuffPost UK.

“Faced with rapidly increasing levels of infection with the Omicron variant on the back of persistently high levels of Delta infection, the only way to break the chains of transmission is to continue to expedite the booster campaign while also using other behavioural approaches such as more widespread use of face coverings, covid passes in crowded venues and, where possible, working from home.”

In terms of how many people we should see in one go, Professor Young says there’s no magic number. “Whether it’s mixing with no more than three households [as in Scotland] is debatable, but the key message is to limit interactions as much as possible,” he says.

Similarly, Professor Paul Hunter, a professor of medicine specialising in infectious diseases at the University of East Anglia, is not convinced that Scotland’s three-household rule will go far enough to make a difference.

He points us towards research led by scientists at the University of Oxford, which analysed the effectiveness of government interventions against Covid-19 in previous waves of the pandemic.

“So I don’t think restricting household mixing to three households would have much additional benefit and would not argue for this to be introduced in England,” Professor Hunter says. “Though I would add that Omicron is more transmissible than Alpha was, so may not be directly comparable.”

Unless further restrictions are introduced across the UK, socialising this December ultimately remains a personal judgement call, and of course, it would be smart to show extra caution if you’re planning to see vulnerable loved ones.

Ventilating homes by opening windows or meeting outdoors are both good ideas, and Prof. Young says taking a lateral flow test (LFT) before you socialise will help reduce the risk.

“My mantra is ‘flow before you go,’” he says. “We must encourage the responsible use of LFTs before people go out to mix with others. LFTs are also an important way for folk to ensure that they are safe to enjoy Christmas with their family and friends.”