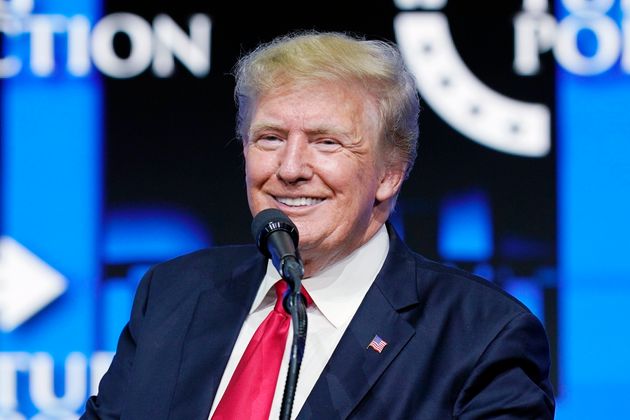 Shaky messaging on pandemic-related affairs aside, former President Donald Trump now considers the Covid-19 vaccines “one of the greatest achievements of mankind.”

In an interview with right-wing media personality Candace Owens this week, Trump took personal credit for the efficacy of the vaccines, as well as the “incredible speed” at which they were developed.

“I came up with three vaccines – all are very, very good,” Trump told Owens on Wednesday. “The vaccine worked, but some people aren’t taking it. The ones that get very sick and go to the hospital are the ones that don’t take their vaccine.”

“But it’s still their choice,” he continued. “If you take the vaccine, you’re protected. But the results of the vaccine are very good, and if you do get it, it’s a very minor form. People aren’t dying when they take the vaccine.”

Donald Trump: 'The Vaccine is one of the greatest achievements of mankind' 'All three vaccines (Pfizer, Moderna, J&J) are very good' 'The vaccines work – If you take the vaccine you are protected' 'People aren't dying when they take the vaccine' pic.twitter.com/fU8q1sdMda

Owens has been an outspoken critic of Covid-19 safety protocols, and in October, she shared that she was not vaccinated.

“I survived the greatest psychological fear campaign in human history,” she wrote on Twitter at the time. “I see our media and governments for what they are now: powerless without our incessant fear.”

The interview marked the second time in less than a week that Trump has promoted the jabs. Last weekend, he drew boos in Dallas after revealing to former Fox News host Bill O’Reilly that he’d received a booster shot at some point prior to the pair’s four-city History Tour.

Trump’s endorsement of the vaccines has put him at odds with his base. A November poll conducted by the Kaiser Family Foundation found that the widest divide in vaccination rates in the United States exists between Democrats and Republicans. According to the poll, 60% of unvaccinated Americans identified as Republican or Republican-leaning independents, while 17% said they were Democrats or Democrat-leaning.

On the other hand, White House press secretary Jen Psaki and other prominent Democrats have expressed appreciation toward Trump for his vaccine comments.

Trump tested positive for Covid-19 in October 2020, just weeks before losing the presidential election to his Democratic rival, Joe Biden. He reportedly received his initial Covid-19 vaccination prior to leaving office in January, but unlike Biden and other politicians, he was not photographed while doing so.

11 Striking Photos You Missed This Week