Table Manners People Get Wrong And Why It May Actually Matter 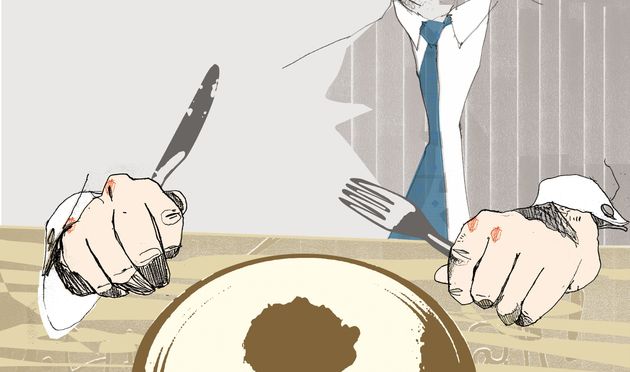 Last year, when my roommates and I were stuck with each other for the festive period, one of them made a startling accusation over dinner: According to her, I hold my fork wrong.

Like most of us, I think, I learned my table manners from my family rather than through any kind of formalised etiquette classes. So while I’m sure there are little customs and mannerisms of high society to which I’m not privy, it never occurred to me that I could be doing something as basic as holding my fork wrong. I wondered with horror – did work connections, friends, partners’ families, basically everyone I’d ever eaten in front of, think I was a rude slob?

Fortunately, Lizzie Post of the Emily Post Institute, a century-old authority on etiquette who is based in Vermont, assured me that I’m “probably not doing anything rude.” She did talk about the best way to hold cutlery, which we’ll get into, but it has more to do with keeping your food from slipping off your plate than appearing classy or not.

Table manners, to some, can be a class signifier, but most of the little rules and customs we’re taught to follow have some practical reasoning behind them. They’re not often just frivolous or aesthetic in nature. At least the ones worth following. I spoke to some etiquette experts to find out what the most common faux pas are when it comes to etiquette on eating and drinking – and why those customs are worth paying attention to in this modern age.

Don’t gross out everyone at the table.

The most important purpose of etiquette, Post emphasised, is really to make the people you’re with feel comfortable and at ease. And a great way to make a dinner uncomfortable is to gross out your fellow diners. For her, the most important “rule” to follow is an obvious one: Chew with your mouth closed, and be mindful of the sounds you’re making while eating and drinking.

“We want them to enjoy our company and our conversation, and when we’re seeing masticated food, that’s not going to happen,” Post said.

She did make one important caveat. Some people have medical conditions that make it difficult for them to breathe through their noses while eating. If you’re one of those people, she advises you to just do your best. Chances are you already have your own methods for chewing discreetly. In any case, don’t be a jerk if someone chews loudly or with their mouth open. Making someone else feel ashamed of the way they eat, especially when it’s out of their control, is a much bigger social misstep.

General messiness while eating is another way to gross out your company, so just be sure you’re not eating in a way that results in, say, literal egg on your face. If you’re unsure of the way you look while eating, Post says that eating in front of a mirror or filming yourself can be very revealing. You might notice little idiosyncrasies that you otherwise wouldn’t, and if you don’t like how you come across, you can adjust accordingly.

Don’t salt your food before you taste it

Etiquette consultant Monika Walczak raised a point that’s as practical as it is polite. Don’t season your food before you taste it.

“By seasoning food before trying, we send the message to the host, or the person that has cooked the meal, that we don’t really trust their cooking skills and we need to season this food, even before trying,” she said.

It’s fine to top off your food with a bit of salt and pepper, but try it first to make sure the food actually needs it. Besides, you can always add more salt, but you can’t take it away. If you accidentally make your meal taste like the ocean, you’ll be guzzling water all night. Yuck.

And if someone asks you to pass the salt or pepper, send both. Walczak says keeping the shakers together is just a good way to keep them from getting lost at a big table.

The way you hold your utensils can matter, but mostly for practicality

Ever sat down at a table to find way more forks than you know what to do with? Honestly, this is the kind of etiquette that you really don’t have to worry too much about. Do some research if you’d like, but don’t stress over which is the salad fork and which is the dinner fork.

“Emily Post was always the first to say it doesn’t matter which fork you use,” Lizzie Post told me. “It [only] matters that you’re using a fork.”

That said, there are a few cutlery customs that are just practical. Case in point, the weird way I grip my fork. No matter which cutlery style you use, American or Continental (look it up if you’re curious, but that’s another detail not to sweat), you want to hold your fork and knife similarly to how you’d hold a pencil as opposed to, for instance, gripping it with your whole fist. (For the record, I swear my fork-holding style isn’t that exaggerated. It’s more of a half-fist grip.)

Post said it’s most common to see people doing this when they’re stabbing something, like a piece of meat, and cutting it with their other hand. The “correct” way is actually just the more effective way. When you hold your fork at an angle, with your thumb and index finger, you actually have greater precision and control, which means you’re less likely to accidentally send your food flying off your plate. Saucy or buttery food can be especially prone to slippage.

Sometimes the placement of your utensils really does send a message.

There are proper ways to rest your cutlery on your plate when you’re not using it, chiefly for the sake of communicating with your host or waitstaff. Post says to envision your plate as a clock face and set your fork and knife at the 8 and 4 o’clock positions when you’re taking a break from eating or stepping away from the table for a moment. At a restaurant or catered event, servers recognise that position to mean, “I’m not done; don’t take my plate away yet.” When you are done, rest both at 4 o’clock.

Traditionally, servers are trained to serve you your plates from your left side and clear your plates from the right, particularly in fine dining settings. When your utensils are oriented toward the right, a server can easily pick them up with one hand without risking a knife sliding off. 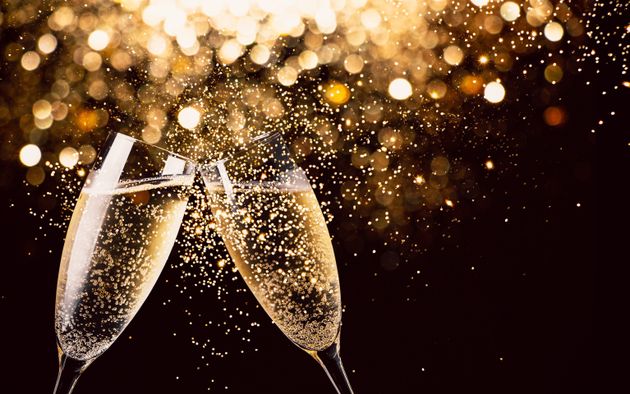 What about drinking glasses and toasting etiquette?

First and foremost: glasses are set to the right of plates, Walczak reminds us. So if you’re overwhelmed by a densely set table, just keep that in mind. The glasses on the right side of the plate are yours.

No matter what’s in your glass, the general rule is to take sips, not gulps, and do it quietly, without slurping. Also, don’t do that thing where you turn the glass upside down to get the last drops, Post advises.

Like most of these etiquette guidelines, the reasoning is simply to avoid making a spectacle of your basic human functions. You probably don’t want people to miss what you have to say because they’re too distracted by your drinking mannerisms – or, like a girl on the subway once did to me, knock skulls with someone when you throw your head back to take a swig.

When it comes to wine and wine glasses, there are a couple of particulars worth knowing. Wine educator Ami Gangemella says that when people toast, she often sees them clinking glasses at the delicate rim. Clinking at the bowl, instead, reduces the risk of accidentally smashing and breaking the glasses. No one wants to deal with stains and shards mid-party.

Being the recipient of a toast can be an awkward moment of spotlight, especially if you don’t know what to do. Walczak says that in formal settings, the most gracious thing to do is basically nothing, Don’t raise your glass, don’t take a sip.

“The person being toasted should just sit quietly, smile and appreciate the toast that has been given in their honour,” she said. “Let others raise their glasses and drink.”

The other wine-drinking custom to know is that, although it’s common for people to hold their glasses by the bowl, the better way is to hold them by the stem with your thumb and forefingers, Gangemella says. (You can support the bottom with your pinkie if you want.) This keeps your body heat from warming up the wine ― room-temperature Champagne just doesn’t taste as good.

Again, the purpose of all of these guidelines is to make the people around you feel comfortable and to allow the focus to be on what you all have to say and how delicious the food is rather than on the way you eat it.

For that reason, try not to sweat it too much if there’s something you didn’t know or did differently than your company. If anyone gives you judgmental looks about something as minute as forks or glasses, ultimately they’re the one being rude.

As Lizzie Post put it, “Anyone who’s completely offended to dine with you because of how you’re holding your cutlery doesn’t deserve your company.” 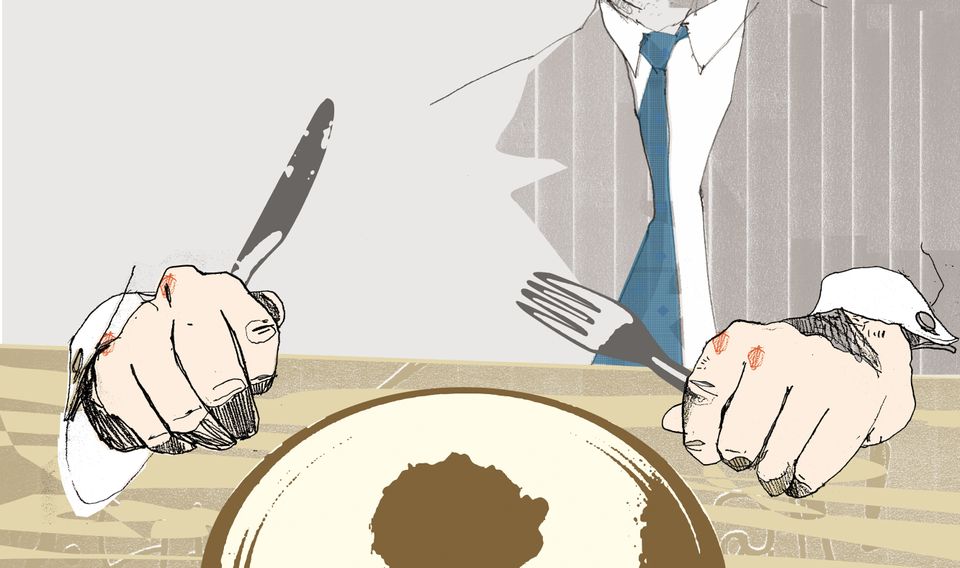