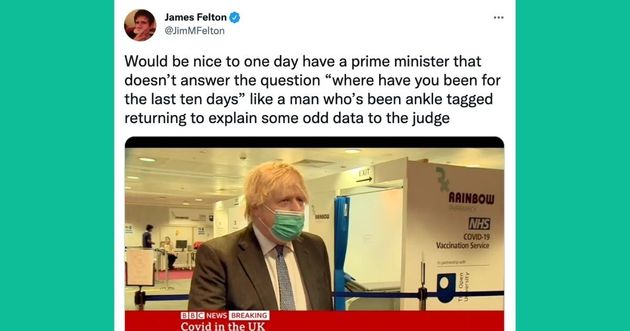 When asked about his whereabouts for the last 10 days, Boris Johnson appeared to stutter before arriving at the bizarre answer that he had “been in this country” – immediately prompting speculation among his critics.

Speaking to a BBC News journalist on Wednesday during a tour of a vaccine centre, the prime minister was asked: “Where have you been for the last 10 days?”

He appears to laugh slightly, before adding: “Where do you think?”

Before the reporter could reply, the prime minister said, “thank you”, and starts to walk away from the camera crew.

While prime ministers are entitled to take holidays, Johnson’s absence has raised eyebrows in recent weeks as Covid cases have been soaring across the UK.

He appeared to withdraw from public appearances as criticism of him increased in the wake of ‘Partygate’, while the ongoing allegations that No.10 held several parties for its employees in December 2020 infuriated the public, especially as the rest of the country was under strict lockdown rules at the time.

Partygate followed the complex sleaze row, prompted by the government’s attempts to let a then-Tory MP off the hook for breaching parliamentary rules.

Johnson has also faced intense scrutiny in the past for staying in a Conservative donor’s accommodation on the luxury island of Mustique in the past, and for going on holiday when the Afghanistan crisis was unfolding in August earlier this year.

The prime minister’s popularity has now reached its lowest levels since he was elected in 2019.

So it is not very surprising that people weren’t exactly impressed with Johnson’s latest hesitant answers on Twitter.

What an extraordinary panic from Johnson, asked the simplest possible question: Where have you been for the last ten days? ~AA pic.twitter.com/DA9XixS6dR

Definitely been abroad then….

"I was DEFINITELY NOT on holiday at a Tory donor's pad on Mustique."

"Hello, my name is Boris Johnson and, I… Uh… have been in this country, yes, that'll do" pic.twitter.com/TRF2HF4kIP

Would be nice to one day have a prime minister that doesn’t answer the question “where have you been for the last ten days” like a man who’s been ankle tagged returning to explain some odd data to the judge pic.twitter.com/cgDRlJ513R

What an odd reply?

Why would he feel that he needed to say that he had been "in this country"?

How was he not prepared for this question? #JohnsonMustResign#WhereisJohnson#WherewasJohnsonpic.twitter.com/Ba2RaHuGuU

An answer that’s in no way suspicious or concerning from the Prime Minister:pic.twitter.com/TWWsTqOxtb

Covid Latest: Boris Johnson Confirms 90% Of ICU Patients Have Not Had Their Booster Jabs