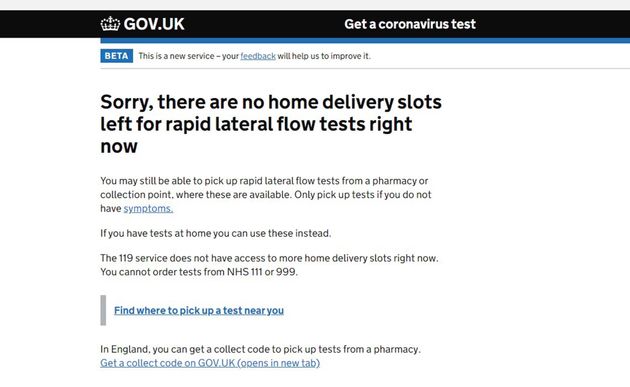 The government is urging people scrambling to secure supplies of Covid-19 tests to “try back later” as many are face frustrations with Boris Johnson’s central policy for keeping life moving.

On Wednesday, ministers acknowledged a worldwide supply issue is hitting the UK as people again struggled to get tests through pharmacies or delivered to their home.

The government website showed no PCR tests were available for home delivery – even for essential workers – in England or Northern Ireland, with “very few” in Scotland, while Wales had availability only in some regions.

As anger grew – and the Tory government was accused of overseeing a “shambles” – the UK Health Security Agency said almost eight million test kits would be made available to pharmacies by New Year’s Eve.

🚨I’ve just been sent this by two doctors within 5 minutes. According to the government website, no PCR tests available anywhere right now in England 🚨(👇 https://t.co/JWNy1OQfeR) pic.twitter.com/DAThusu286

Tests are also being used to replace self-isolation for contacts of confirmed Covid-19 cases, while people returning to work following the Christmas break has also added to demand.

After the UKHSA said tests may be temporarily unavailable on the government website at points throughout the day due to “exceptionally high demand”, and urged people not to order more tests before using the ones they have, a spokesperson said almost eight million test kits would be made available to pharmacies by New Year’s Eve.

The spokesman said: “The UK’s testing programme is the biggest in Europe with almost 400 million tests carried out since the start of the pandemic.

“We are delivering record numbers of lateral flow tests to pharmacies across the country, with almost eight million test kits being made available to pharmacies between today and New Year’s Eve.

“We have made 100,000 more PCR booking slots available per day since mid-December and we are continuing to rapidly expand capacity – with over half a million tests carried out on December 23 alone and delivery capacity doubled to 900,000 PCR and LFD test kits a day.

“If you have not been able to get the test you need from gov.uk, please keep checking every few hours as more PCR and LFD tests become available every day.”

Before the update, work and pensions minister Chloe Smith advised people who cannot get Covid tests through the government website to “try back again later”.

Asked on BBC Radio 4’s World at One programme about reports that tests are in short supply, she said: “Now behind the scenes, obviously, we’ve got to make sure that the Gov.uk website and the way that people are accessing that is always there for people and able to get those kits to people.

“That is happening behind the scenes. I appreciate that every so often the site may go down but try back again later, because that is how we are making sure it is all there.”

Pharmacies are asked for lateral flow tests ‘every five minutes’

Leyla Hannbeck, chief executive of the Association of Independent Multiple Pharmacies, said patients are often unable to find the Covid-19 tests in pharmacies because of low and “inconsistent” supplies.

Speaking on BBC Radio 4’s Today programme, Hannbeck said: “What our members are telling us is that demand for the lateral flow tests is very high at the moment due to the current guidelines around self-isolation.

“Pharmacies are reporting that every five minutes, approximately, somebody comes in to the pharmacy asking for a test.

“But, unfortunately, because of the issues around supply being patchy and inconsistent, it means that those who come for the test don’t always get it, which is very stressful not just for the pharmacy team but for the patient.

“The scale of the problem is huge because the demand is high, because of the current guidelines.”

Underlining how testing is key to avoiding further lockdowns, the prime minister urged people to get swabbed before enjoying New Year celebrations.

During a visit to a vaccination centre in Milton Keynes on Wednesday, Johnson told reporters: “Everybody should enjoy New Year but in a cautious and sensible way – take a test, ventilation, think about others but, above all, get a booster.”

But shadow health secretary Wes Streeting said: “The failure to make enough tests available weeks after they became a requirement is a total shambles.

“People are trying to do the right thing, follow the government’s own advice, and test themselves regularly, but are prevented by the Conservative government’s incompetence.

“They need to get a grip and provide enough tests so people can keep themselves and everyone else safe.”