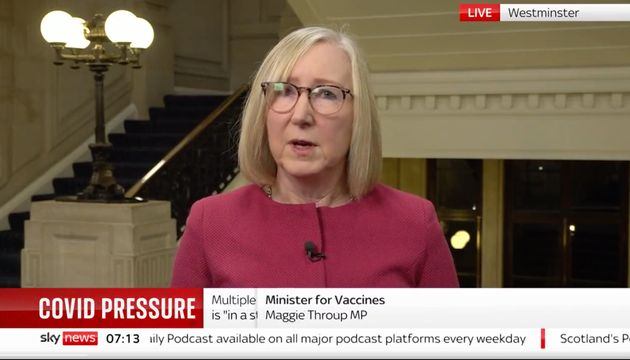 Vaccines minister Maggie Throup has been unable to say how many people are currently self-isolating with covid despite fears over widespread staff shortages.

Throup also failed to give a specific figure on how many hospital trusts had declared critical incidents following reports that at least six had warned that priority services may now be under threat.

Asked by Sky News how many Britons were currently self-isolating, Throup replied:  “I’m not sure of that [actual] figure, but I think what’s shown over Christmas is that a lot of people have caught the disease, the Omicron variant is very transmissible, but what is good news, it doesn’t seem to be resulting in severe diseases as some of the other variants did.”

Pressed on why she did not have the figure to hand, Throup responded: “Well, not everybody declares that they’re self-isolating, I think that’s one important thing, that it’s something that they do because they’ve tested positive or they’ve been in contact with somebody whose tested positive, they don’t have to report that in.

“The vaccine is working and that’s the best way to stop the transmission, and to stop hospitalisations and for our life to get back to normal.”

Heath leaders have been warning that the Omicron variant has forced the health service into a “state of crisis”. The latest figures show there were a further 157,758 lab-confirmed Covid-19 cases recorded in England and Scotland as of 9am on Monday.

The United Lincolnshire Hospitals NHS Trust said “extreme and unprecedented” staff shortages were expected to result in “compromised care”, while Aaron Cummins, chief executive of University Hospitals of Morecambe Bay, confirmed that his trust had declared an “internal critical incident”.

Staff shortages have not been limited to just hospitals. Education secretary Nadhim Zahawi has indicated that schools may be forced to merge classes into larger sets in the event of high levels of staff absences when pupils return from the Christmas break this week.

New guidance for pupils to wear masks in the classroom has sparked anger from some Tory backbenchers, but Zahawi said face coverings were one of many “tools to be able to make sure that education is open”.

Whoever sent me this anonymously, I agree with you! pic.twitter.com/lXvF9wEcMd

“The most important thing is to keep them [schools] open,” he said.

“We monitor staff absenteeism, I just said to you we’re running at about 8% last year. If that rises further then we look at things like merging classes, teaching in bigger numbers.”

Boris Johnson urged people to keep coming forward for their vaccines and booster jabs at a vaccination centre on Monday, saying the programme was vital to keep the pandemic under control.

The prime minister’s plan B measures — which include mask-wearing in most indoor spaces, guidance to work from home and the use of covid passports — will be reviewed when MPs return to the Commons on Wednesday. 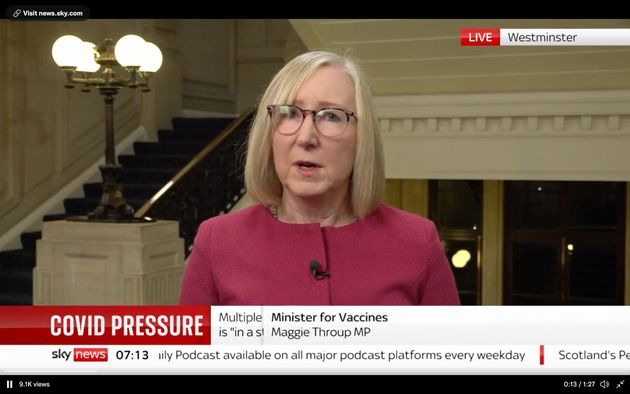