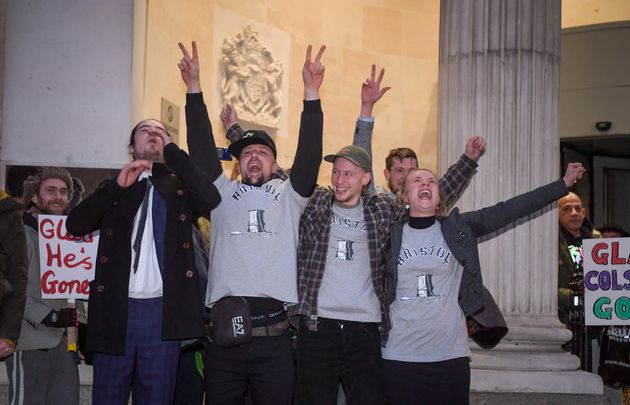 A minister has said a bill going through parliament will not allow protesters to “go around and cause vandalism”, after four activists were cleared of criminal damage for their role in toppling a statue of slave trader Edward Colston.

Transport secretary Grant Shapps said he did not want to comment on individual cases but reiterated his view that “we’re not in a country where destroying public property can ever be acceptable”.

Shapps made the remarks after a jury cleared four people of criminal damage at Bristol Crown Court on Wednesday for their role in removing the statue of the 17th century slave trader and throwing it in the city’s harbour during a Black Lives Matter protest in the summer of 2020.

Rhian Graham, 30, Milo Ponsford, 26, and Sage Willoughby, 22, were caught on CCTV passing the ropes around the statue that were used to pull it down, while Jake Skuse, 33, was accused of orchestrating a plan to throw it in the harbour.

All four defendants admitted their involvement but denied their actions were criminal, arguing the statue itself had been a hate crime against the people of Bristol.

But Shapps said that despite the verdict, destroying public property was still “unacceptable”.

“I don’t want to be seen to be commenting on an individual case, it had a jury, they made the decision, they would have seen all the facts,” he told Times Radio.

“But as a broader point, I would say we’re not in a country where destroying public property can ever be acceptable.”

He later told BBC Breakfast: “We do have a clause in the Police, Crime and Sentencing Bill which will perhaps close a potential loophole and mean you can’t just go round and cause vandalism, destroy the public realm, and then essentially not be prosecuted.”

Under the bill, which is currently in its final stages in the House of Lords, the maximum sentence for criminal damage to a memorial will be extended from three months to 10 years’ imprisonment.

Where the value of the damage is less than £5,000, the case must be tried summarily and will attract a maximum sentence of 3 months’ imprisonment and, or a fine of up to £2,500.

An estimated £3,750 of damage was done to the Colston statue, the court heard.

During the trial, the jury also heard that Colston was involved in the enslavement and transportation of over 80,000 people, of which almost 10,000 were children.

An estimated 19,000 died on ships bound for the Caribbean and the Americas.

Over the course of the two-week trial, the court heard there had been campaigns in Bristol to have the statue removed dating back to the 1920s.

Trump Tried A Coup In Plain Sight — And Has, So Far, Got Away With It