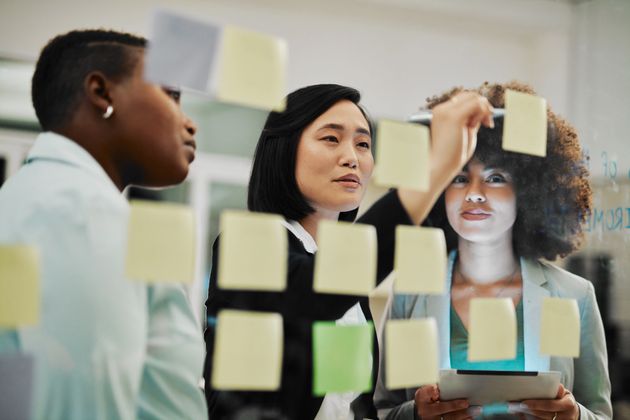 Amreen*, a 27-year-old journalist, turned down a job she was overqualified for at a national newspaper due to the race pay gap.

“They wouldn’t consider me for a job that paid slightly more, even though I had the same experience and qualifications as white male counterparts doing that job,” she says.

“I had to turn it down in the end even though I was encouraged to take it because of the ‘prestige’ of the publication. But I couldn’t afford to live on this salary based on my financial responsibilities.”

Unfortunately, her experience is far from unique. Research from non-profit People Like Us has unveiled the true extent of the UK’s race pay gap, with workers from Black, Asian, mixed-race and minority ethnic backgrounds paid only 84% of what their white counterparts earn.

That means Black, Asian and other minorities earn 16% less than their white colleagues for no reason.

The study found that a quarter of people said the disparity in pay, compared to their white counterparts, was up to £5,000 – a loss of up to £255,000 in their lifetimes.

Over a quarter (26%) left their industry because they weren’t given a pay rise they felt they deserved. Half said not getting a salary increase or promotion has caused them to suffer with anxiety or depression.

More than half (59%) also said they are currently in a place of work where they feel the colour of their skin is affecting their progression.

Unconscious (or overt) biases can affect minorities from progressing, from not being well-liked, or simply not enjoying the place enough to want to move up (due to microaggressions or hostile work environments).

This just reminded me of the time I asked a white male colleague to help me seek equality and if he'd consider sharing his pay details with me and I would do same. Would have respected him more if he just said no. But he told me his mother wouldn't allow it. I was gobsmacked. https://t.co/wgn9x0MOHz

“I only realised this because once I started asking for advice on whether to accept the job offer or not, white male journalists started disclosing their salaries to me (which I think is super important) and in general I think pay transparency is vital,” she explains.

“One thing I’ve found recently is that when US news outlets put ‘competitive’ on the salary section of a job ad, they genuinely mean it but when UK news outlets do it, it usually means they’re too embarrassed to say what the salary is.”

What can you do if you think you’re being paid less than white colleagues?

Race think-tank Runnymede Trust says this is a problem which has endured that can only be fixed from the top.

CEO Dr Halima Begum tells us: “We know the disparities ethnic minority people face in the workplace, the burden to fix these structural inequalities should not fall on them. This is why mandatory ethnicity pay gap reporting to all large employers is so important and must be introduced.”

However, she says ethnicity pay gap reporting alone will not close the gap – it must both fuel and accompany action.

“For instance, if the ethnicity pay gap is explained by fewer Black and ethnic minority leaders in high paid roles, firms need to focus on closing this gap between senior leaders at work and ensure representation at all levels,” she says. “Firms should also delve into data on career progression, particularly at mid-career level, to assess whether ethnic minority colleagues are progressing at same level or are disproportionately on insecure contracts. These are some of the reasons why the ethnicity pay gaps exists and is sustained.”

But what can you do if you discover you are being paid a lower wage? Or if you want to help a colleague in this position?

Dr Begum adds: “It is illegal for colleagues to be paid less for doing the same job. For those that find themselves in a the position where they are being paid unfairly for their work this is important to remember and, where possible, raise.”

If you’re part of a union, you could speak to them for advice on how to proceed.

You can also contact Citizens Advice for information on what to do next if you think you’re being unfairly paid. Contact your local centre or call its national phone service, Adviceline.

Lynn Cahillane, head of marketing at Totaljobs, previously told HuffPost UK that if you think you’re experiencing pay discrimination, you have the right to ask your HR department to examine the salary data that is available to them and explain any inconsistencies to you.

“We again reiterate the point that the burden to fix structural inequalities in the workplace must not fall on those disadvantaged by these structures,” says Dr Begum.

“Unlocking the infinite potential of the ethnic minority workforce carries huge benefit not just for individuals, but for wider society. The McGregor Smith review showed that an extra £24 billion could be added to the UK economy if we truly support people of colour with career progression. Ethnicity pay gap reporting will give us the data to identify the necessary actions to reduce the gap, and allow not only our workforce to flourish, but our post-pandemic economy too.”

*Names have been changed.