Why The Cladding Crisis Might Not Be Over Just Yet 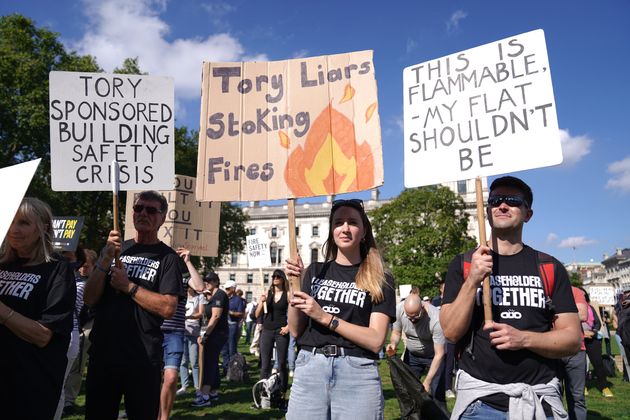 Four and half years after the Grenfell fire, a solution to part of the cladding crisis created in the aftermath of the tragedy has finally been proposed.

On Monday, housing secretary Michael Gove said the government will take “every step necessary” to ensure that no homeowner living in a housing block above 11 metres would have to pay for fixing dangerous problems.

But despite promising even to create a new law to cover the estimated £4 billion costs to deal with the issue, those trapped in the cladding nightmare warned they would still be faced with daily costs that haven’t “disappeared overnight”.

“We will be looking to the housing secretary to ensure his encouraging words are matched with decisive action on the ground,” said a spokesperson for the End Our Cladding Scandal campaign group.

Meanwhile, the housing industry hit out at the “scatter gun approach to fixing an issue that several governments set the regulation for” – suggesting the issue is a long way from being fixed.

What is the problem?

A spotlight was cast on the use of flammable materials in the construction of high-rise buildings following the Grenfell Tower fire in 2017, which killed 72 people.

Caught in the middle of a complicated row over who is responsible for people living in flammable buildings, homeowners have spoken out for months about suffering anxiety, illness and financial pain – not to mention fears for their safety – as their properties are almost impossible to sell and costs soar.

Many of these people – leaseholders in buildings owned by a private or public freeholders – have been left facing potentially ruinous bills that include costs of more than £100,000 to replace the unsafe materials or pay for so-called “waking watches”, where someone is employed to patrol a building checking for fires.

What action has been taken so far?

In February 2021, the government announced a multibillion-pound package in a bid to ensure no leaseholders in high-rise blocks in England face charges for the removal of cladding.

The measures were intended to protect those who own homes in taller buildings.

They mean leaseholders in blocks over 18 metres (59ft) in height can access grants to replace unsafe cladding.

The case has so far been different for those who own homes in smaller buildings.

For blocks of between 11 metres and 18 metres (36ft and 59ft), the government said in February it would introduce a “long-term, low interest” loan scheme under which “no leaseholder will ever pay more than £50 a month towards the removal of unsafe cladding”.

But Gove, who subsequently took over the housing brief, said in November: “I’m still unhappy with the principle of leaseholders having to pay at all, no matter how effective a scheme might be in capping their costs or not hitting them too hard at any one time.”

What is the plan going forward? 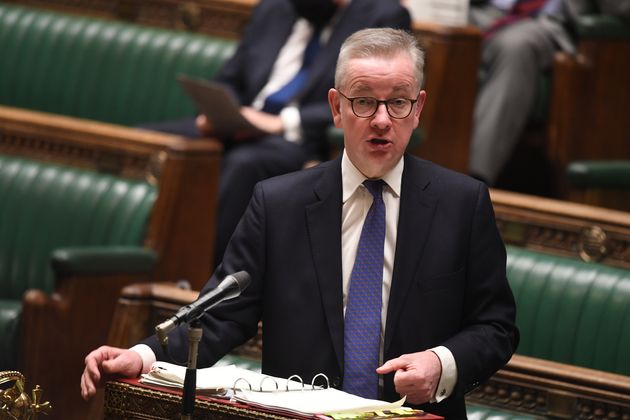 Gove has now said developers must agree a £4 billion plan to fix dangerous cladding on lower-rise flats by early March or risk new laws forcing them to act.

The Cabinet minister threatened that he is “prepared to take all steps necessary” to fix the “broken system” in a letter to the industry ahead of detailing the plans on Monday.

Potential action also includes restricting access to government funding and future procurements, the use of planning powers, and pursuing firms through the courts.

Under the plans, leaseholders in buildings between 11 metres and 18 metres tall will no longer have to take out loans to cover the costs of remediation work – despite no new money coming from the Treasury.

Instead, developers have been told to agree to start contributing this year to cover the “full outstanding cost”.

In the Commons on Monday, he confirmed that he had “an absolute assurance” from Chancellor Rishi Sunak that he was ready to impose taxes on the sector if they were not prepared to come forward with a solution.

“We will take action to end this scandal and protect leaseholders,” he said.

“We will make industry pay to fix all the remaining problems and help to cover range of costs facing leaseholders.

“Those who manufactured combustible cladding and insulation – many of whom have made vast profits, even at the height of the pandemic – they must pay now instead of leaseholders.”

What do campaigners and MPs make of the news?

A spokesperson for the End Our Cladding Scandal welcomed the news that Gove “recognises the desperate unfairness of forcing victims of the building safety scandal to pay for the collective state and industry failure that has blighted hundreds of thousands of lives since the tragic events at Grenfell”. They added:

“Strong words, but then we have heard strong words from ministers many times before. This government may be starting to talk tough, but these promises – finally – need to be backed by tough action, too. It is clear from a leaked Treasury letter over the weekend that chancellor Rishi Sunak still does not appear to understand the gravity of our situation and is seemingly doing all he can to evade ensuring homeowners are protected. There may be more funding for cladding only, but the burden of paying for repairs for other serious safety defects – lack of compartmentation, missing fire breaks, shoddy building work – has still not been lifted from leaseholder shoulders, whatever their building’s height.

“Nor too have the daily costs hitting leaseholders hard – payments for soaring insurance premiums or sky-high waking watch bills – disappeared overnight. Many campaigners have endured a torrid time over the past few years, fighting freeholders and housing associations, begging for even basic details of their buildings, watching their savings bled dry and seeing their mental health worsening. None of that time or money can ever be got back.

“Mr Gove says he is willing to go after the developers and manufacturing firms who have caused such widespread human misery. But there must be a recognition too of the part that successive governments have played in this wider scandal. Homeowners may have been failed by the construction sector and by cladding manufacturers – but they have also been failed by the Ministers and officials meant to regulate those industries. The next phase of the Grenfell Inquiry is likely to expose just how far those failings went.

“Today Mr Gove promised that amendments to the Building Safety Bill, due to come before the chambers shortly, will include statutory protections for leaseholders. As always, we will be looking to the housing secretary to ensure his encouraging words are matched with decisive action on the ground.”

David Renard, housing spokesperson for the Local Government Association, which represents 350 councils across England and Wales, warned that leaseholders were “not the only innocent victims” of the scandal.

“The construction industry must also be made to fix the fire safety defects it has built into blocks owned by councils and housing associations,” he said.

Shadow housing secretary Lisa Nandy said “promises are no substitute for a plan” as she urged the government to go further to protect leaseholders from the costs.

“We must have legally binding protection for leaseholders in law to defend them from the costs of these appalling failures, a fixed deadline which will bring an end to this nightmare and a secretary of state who is able to marshal the resources and political will to take on the might of big money interests – and win,” the Labour MP said.

Will the housing sector pay-up?

Ministers may face a fight from the housing industry to pay the costs. Rico Wojtulewicz, head of housing and planning policy at the National Federation of Builders, said: “The government has already introduced one industry specific cladding tax, and now another is on its way. This piecemeal approach is confusing, unnecessarily complex and will likely impact the number of homes built.

“It’s also worth pointing out that the developer paying for remediation will almost certainly not have been responsible for the cladding put on the property – most of which was retrofitted long after construction and has nothing to do with the developer.

“Another construction industry related tax is neither fair, nor proportionate and industry will be dismayed at this scatter gun approach to fixing an issue that several governments set the regulation for.

“Perhaps all MPs will sacrifice a percentage of their salary and pensions to help fund remediation, see as the real responsibility lies with legislators?”

Meanwhile, Stewart Baseley, the executive chairman of the Home Builders Federation, accepted that leaseholders should not have to pay for remediation, but said builders should not cover the costs alone. 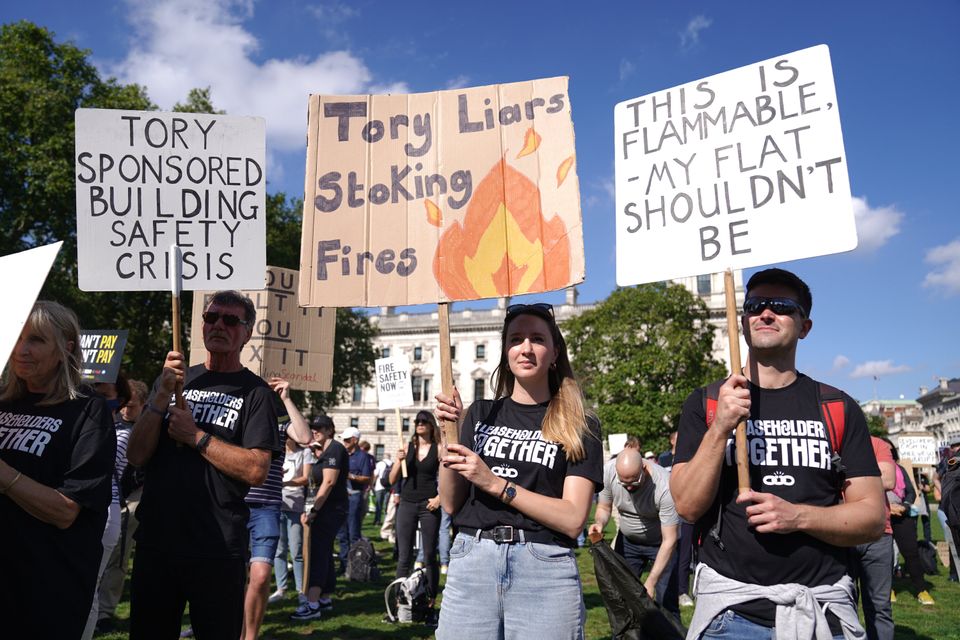