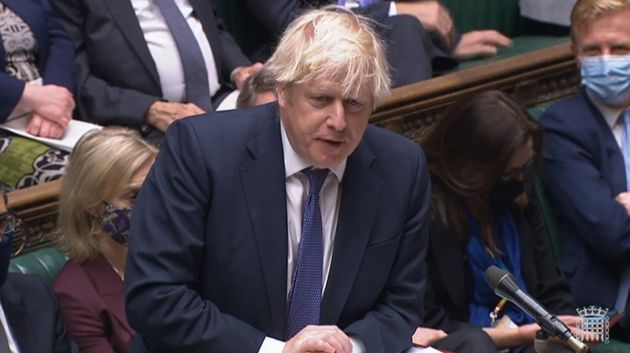 Boris Johnson has admitted he attended the No.10 “bring your own booze” party during the height of the first lockdown.

Speaking at the start of PMQs on Wednesday, the prime minister apologised for the gathering on May 20, 2020.

But defending his actions, Johnson said he believed at the time it was a “work event” permitted “technically”under the rules when he “went into that garden”.

“I know that millions of people have made extraordinary sacrifices over the last 18-months,” he said.

“I know the rage they feel with me and with the government I lead when they think in Downing Street itself the rules are not being properly followed.”

Keir Starmer, Labour’s leader, said it was “ridiculous” that Johnson “didn’t realise he was at a party”.

In an escalation of the war of words, Starmer accused Johnson of “lying through his teeth” and added: “Is he going to do the decent thing and resign?”

PMQs was Johnson’s first public appearance since the leak on Monday of an email, obtained by ITV News, from his principal private secretary, Martin Reynolds.

It revealed Reynolds invited No.10 staff to the gathering to “make the most of the lovely weather”.

“Please join us from 6pm and bring your own booze!” Reynolds told staff.

Revelations about the event have seriously endangered Johnson’s future, with his position as prime minister and Conservative Party leader now openly being discussed in Westminster.

At the time of the garden party, people in England were allowed to meet only one person from another household, providing they were at least two metres apart and outside.

People were not permitted to visit the homes of friends and family – unless it was for care and medical reasons, or to take a child to another household with whom parental responsibilities were shared.

It was not until June 1 that groups of up to six people were allowed to meet outdoors.