‘Haunted, Caught Red-Handed, Found Out’ – This 5 Second Video Of Boris Johnson Says It All 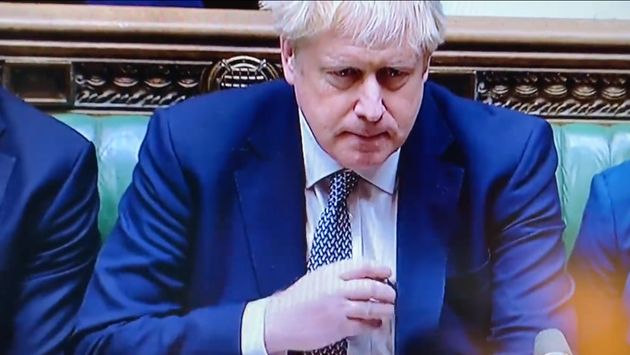 Boris Johnson’s manner during this week’s PMQs was remarkably different to normal – and his sombre expression did not escape many people’s attention.

The prime minister was trying to defend himself after it emerged that No.10 held a drinks party in its garden on May 20, 2020. The rest of the country was in lockdown at the time.

Johnson offered his “heartfelt apology” to the nation after accepting that he was present at the drinks for 25 minutes – but claimed he “implicitly” thought it was a work event, and therefore not in breach of the rules at the time.

He said: “With hindsight, I should have sent everyone back inside, I should have found some other way to thank them and I should have recognised that even if it could be said technically to fall within the guidance, there would be millions and millions of people who simply would not see it that way.

“People who suffered terribly – people who were forbidden from meeting loved ones at all, inside or outside.”

When pressed by the Opposition benches over his response, he repeatedly said everyone should wait for civil servant Sue Gray’s investigation into the alleged parties to find out if any Covid rules had been broken after all.

Even though he continued to bat back the questions about his conduct at the party, some eagle-eyed viewers spotted the moment where the prime minister seemed to look most defeated.

Johnson can be seen in the short clip sitting back on the front benches, looking worried.

It’s a remarkable change compared to an interview from Monday where Johnson appeared to smile and respond light-heartedly when asked about his attendance at the party.

Huh wonder why he can’t just say “no” pic.twitter.com/2CWs3IVfC0

As the BBC’s Laura Kuenssberg tweeted: “PM tried to strike a very different tone, no gags, no smirks, body language of his colleagues, including on front bench shows how uneasy his party [is] – not sure the excuse that technically it wasn’t a party will soothe the anger among his MPs.”

PM tried to strike a very different tone, no gags, no smirks, body language of his colleagues, including on front bench shows how uneasy his party his – not sure the excuse that technically it wasn't a party will soothe the anger among his MPs