If there’s any awards show that should inherit the shine from the increasingly irrelevant Golden Globes, it’s the Screen Actors Guild Awards.

Sure, the SAGs haven’t entirely matched the hedonistic flair that defined the Globes in recent decades. But the star-packed ceremony hasn’t exactly been hurting for buzzy moments either ― be it Brad Pitt and Jennifer Aniston’s backstage hand grab seen ’round the world, or Parasite director Bong Joon Ho’s major proud dad energy when his cast took home the 2020 top prize.

So, days after the celebrity-free, untelevised Globes ceremony essentially went ignored by Hollywood ― save for the social media chaos it sparked online ― all eyes are on the SAGs to deliver some much-needed awards season momentum.

Nominations for the 28th annual ceremony honoringthe best performances in film and TV were unveiled by Rosario Dawson and Vanessa Hudgens on Wednesday, via livestream on the SAG Awards’ official Instagram account.

The Power of the Dog and House of Gucci were the top film nominees, with both netting three nods, while HBO’s Succession and Apple TV+’s Ted Lasso dominated the television field with five nominations each.

As for who’s in the running for the top film prize this year, both The Power of the Dog and West Side Story were surprisingly shut out of the Outstanding Cast field, despite making headway at the Globes.

Instead, Belfast, Coda, Don’t Look Up, House of Gucci and King Richard will compete for the award. Other surprise film nominees included Bradley Cooper getting honoured with a supporting nod for Licorice Pizza (while the film’s breakout star Alana Haim didn’t make the cut) and Cate Blanchett making her way into the Supporting Female Actor category for her performance in Nightmare Alley.

Elsewhere, Kristen Stewart, who seemed an all-but-certain lock for her portrayal of Princess Diana in Spencer, and West Side Story star Rachel Zegler, who just picked up one of the Best Actress Golden Globes, were snubbed.

Instead, Jennifer Hudson (Respect) and Jessica Chastain (The Eyes of Tammy Faye) both received nods and will face off against Olivia Colman (The Lost Daughter), Lady Gaga (House of Gucci) and Nicole Kidman (Being the Ricardos).

On the television side, Succession led the drama categories with Netflix’s Squid Game and Apple TV+’s The Morning Show trailing not far behind with four nods each. As for comedy, Ted Lasso, which cleaned up at the most recent Emmy Awards, was the most well-represented, while Hulu’s newcomer Only Murders in the Building also made a strong showing.

A far more accurate predictor of the awards season to come, given that a significant portion of SAG-AFTRA’s membership overlaps with the Academy Awards voting body, the ceremony can often make or break Oscars chances. The night’s top award for Outstanding Cast is often seen as a key bellwether for whatever film will go on to Oscars glory ― only a handful of movies have ever won the Academy Award for Best Picture without a SAG nomination ― making the event an all-important stop along the awards campaign trail.

But it remains to be seen whether this year’s ceremony will be held at all, with the surge in Covid-19 cases and concerns about the omicron variant. In recent weeks, some awards shows have chosen to push back any in-person gatherings until later in the year, and both the Critics Choice Awards and the Grammys have been indefinitely postponed.

The SAGs, however, seem intent on holding a non-virtual celebration, after last year’s show was delayed until early spring and reduced to a pre-taped telecast spanning only a single hour. But, the only real question remaining is what aggressively casual, but statement-making sweater Jason Sudeikis will wear at this year’s ceremony.

Outstanding Performance by a Cast in a Motion Picture

Nicole Kidman, “Being the Ricardos”

Javier Bardem, “Being the Ricardos”

Benedict Cumberbatch, “The Power of the Dog”

Denzel Washington, “The Tragedy of Macbeth”

Kirsten Dunst, “The Power of the Dog”

Kodi Smit-McPhee, “The Power of the Dog”

Outstanding Performance by an Ensemble in a Drama Series

Outstanding Performance by an Ensemble in a Comedy Series

“Only Murders in the Building”

Outstanding Performance by a Female Actor in a Drama Series

Outstanding Performance by a Male Actor in a Drama Series

Outstanding Performance by a Female Actor in a Comedy Series

Outstanding Performance by a Male Actor in a Comedy Series

Steve Martin, “Only Murders in the Building”

Martin Short, “Only Murders in the Building”

Oscar Isaac, “Scenes From a Marriage”

Outstanding Action Performance by a Stunt Ensemble in a Motion Picture

“Shang-Chi and the Legend of the Ten Rings”

Outstanding Action Performance by a Stunt Ensemble in a Television Series

“The Falcon and the Winter Soldier” 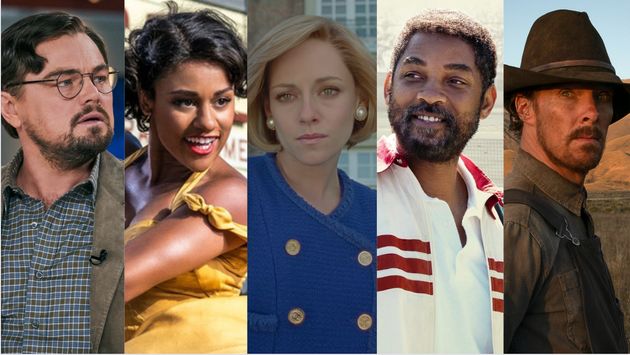 Emma Watson Reveals The ‘Most Emotional Moment’ Of Harry Potter Reunion: ‘I Was Taken Aback’