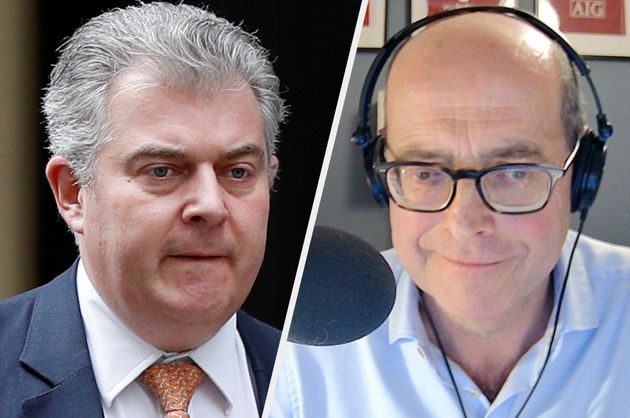 Nick Robinson tore into a cabinet minister on BBC Radio 4′s Today programme on Thursday over Boris Johnson’s apology in the Commons.

The prime minister began PMQs on Wednesday by offering his “heartfelt apologies” for attending a drinks party in No.10′s garden for 25 minutes in May 2020, when the country was under Covid lockdown rules.

He said that, “with hindsight”, he should broken the party up and recognised the general public would have been furious with him – but he maintained that he thought it was a “work event” and therefore, within the rules in place at the time.

Sent out to bat for the prime minister during the morning media round, it wasn’t long before the Northern Ireland secretary Brandon Lewis was put on the spot by journalist Nick Robinson over the exact wording of Johnson’s apology.

He asked: “Why does [Boris Johnson] need hindsight, Mr Lewis?

The incredulity of Nick Robinson is also the incredulity of the country. The prime minister might have been able to get through the day but the damage is done because fundamentally people can see what has happened here, and it was just wrong. pic.twitter.com/1NFkc4WhHx

Lewis replied: “First of all, I wasn’t there.

″I don’t know the details, I’ve seen what’s been reported.

“I’m going to wait and see the details of Sue Gray’s investigation.”

This is the line taken by both Johnson himself and the other members of cabinet who have defended him.

Gray is the top civil servant who has been tasked with investigating all of the alleged parties said to have taken place in No.10 throughout 2020, when the government had put strict measures in place to reduce socialising.

Robinson was also quick to analyse Johnson’s apology on Wednesday, tweeting: “Very striking that @BorisJohnson speaks again and again of ‘mistakes made’ & ‘mistakes we made’ but he can’t bring himself to add the word ‘I’.

“Begs the question – is he apologising for his behaviour, that of his staff or just how things look?”

Johnson is now facing increased calls for his resignation, both from the opposition benches and MPs in his own party.

Very striking that @BorisJohnson speaks again and again of “mistakes made” & “mistakes we made” but he can’t bring himself to add the word “I”. Begs the question – is he apologising for his behaviour, that of his staff or just how things look?

When Is The Right Time To Have Sex When You’re First Dating?