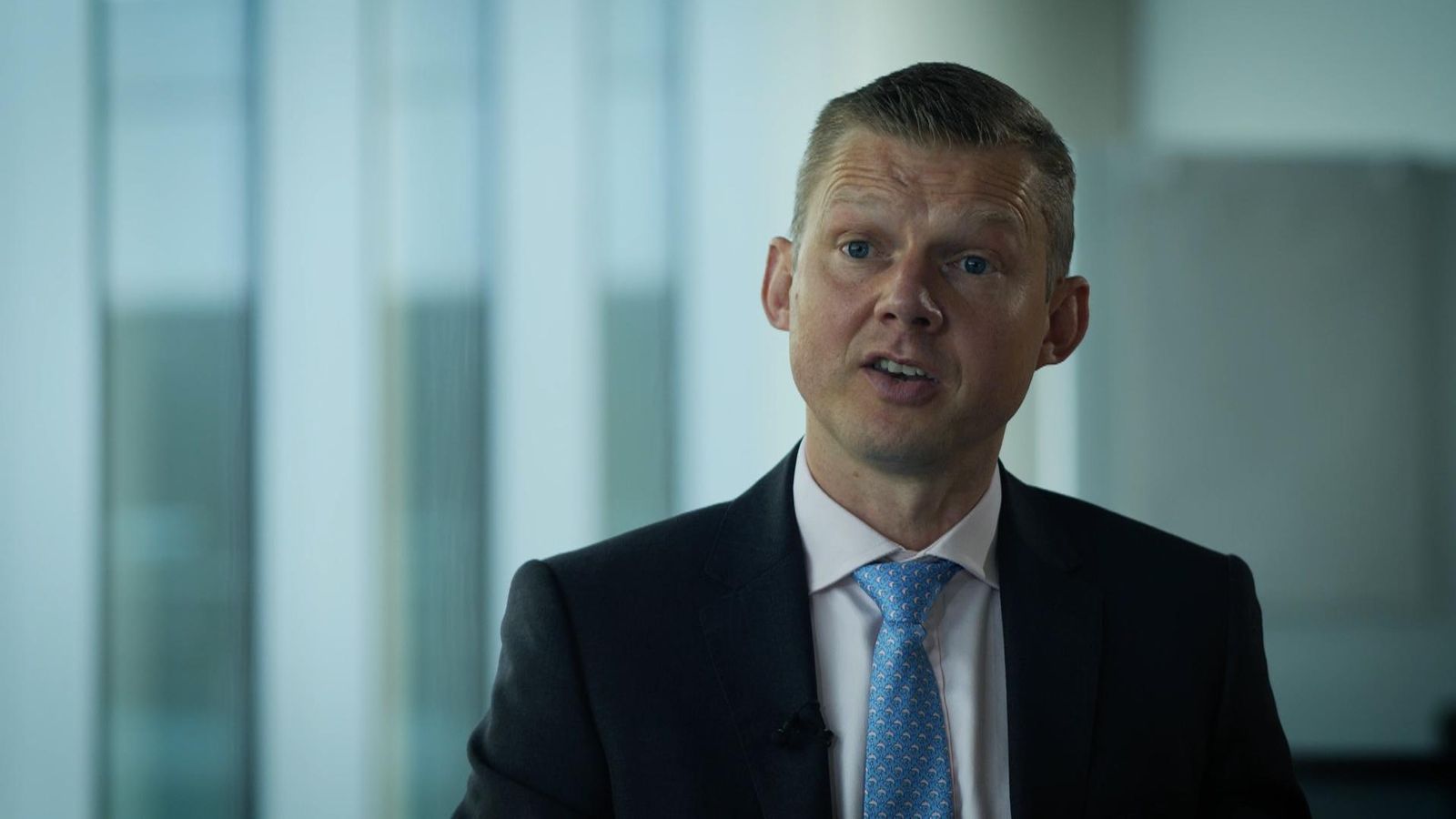 The UK boss of vaccine maker Pfizer says he is “comfortable” with the planned scrapping of most COVID-19 restrictions later this month – but he will continue to wear a mask in crowded settings.

Ben Osborn told Sky News that while only a comprehensive rollout of second doses would provide optimum protection from the virus, data so far suggests a “good level of protection” was in place for the 19 July “freedom day”.

More than 700 million doses of the Pfizer-BioNTech vaccine have been administered worldwide in the seven months since Margaret Keenan received the first dose in Coventry last December, more than any other COVID vaccine.

Around 29 million doses have been given in the UK, with demand increasing as the vaccine rollout has focused on the under-40s, who have been promised an alternative to the Oxford AstraZeneca shot.

Speaking to Sky News a year after Pfizer signed its first supply agreement with the British government, Mr Osborn said the protection offered to all age groups gives him confidence as the government prepares to confirm the next step in its roadmap.

“I will feel much more comfortable once everybody, both here in the UK and across the globe, has received two doses of the vaccine, or one of the others that are available.

“I think it’s only then that we have much more certainty in terms of that protection that we all require,” he said.

“But what we do see from the data so far, in relation to where we are on 19 July, is that we do have a good level of protection. And, therefore, I feel very comfortable with the restrictions and decisions that have been made.”

Mr Osborn, who joined Pfizer as a graduate in 1998 and has led the company’s discussions with the government throughout the pandemic, said he would continue to wear a facemask even after it ceases to be a legal requirement.

He said: “I have a vulnerable child at home, my eldest has pretty severe disabilities, so as I have been for the last 12 months I’ll be very careful and cautious.

“What that means practically if I’m in a crowded situation, I’m in a supermarket, I’m in the local high street, I’ll probably wear a mask. If I’m on a train, and there are lots of people around, I’ll wear my mask.

“There’s still a long way to go so I want to feel I am doing my part.”

Pfizer-BioNTech was the first vaccine to be approved for use in the UK and the UK will receive 100 million doses this year. It anticipates that a third booster-dose will be advised for the high-risk over-50s age-groups to maintain the immune response.

Clinical trials of a modified vaccine targeting the Delta variant will begin next month but data show the current dose provides more than 90% protection against severe illness and hospitalisation.

Mr Osborn said the company has met every delivery deadline here and around the world so far and denied that there have been shortages.

“We have not had a single issue,” he said.

“What we have done is scale up. I think the conversation should be more about demand on the vaccine, rather than shortages.

“The demand has gone up exponentially.

“As the JCVI [Joint Committee on Vaccinations and Immunology] and Government have made decisions around individual vaccines for particular populations we faced increased pressure and demand. But it has never been about shortages. To this day we are doubling the amount of vaccine that we’re bringing in throughout July.”

Production has primarily been based in two factories, at Puurs in Belgium and Kalamazoo in the US, and the time taken to make a batch has almost halved from 110 days to 60 days.

The shelf-life of the vaccine, which initially has to be stored at minus-80C, has also been extended with regulators approving that batches can be stored in a normal refrigerator for 31 days rather than the initial five after being opened.

Like other vaccine manufacturers, Pfizer has faced calls from the World Health Organisation, backed by US President Joe Biden, to waive its patents to allow cheaper copies to be made around the world and increase production.

“Our position from the very start of the pandemic is that there must be equitable access across the globe, whether you live in Surbiton or sub-Saharan Africa, you need access to a vaccine.

“But we are very, very clear that the removal of IP is not the solution to the challenges that we face right now, in terms of making sure there is equity.

“If you remove IP what you will see rapidly is other companies who may not actually have any skill, knowledge or expertise or capability for manufacturing a vaccine, procuring the raw materials that are still under relatively short supply for companies like Pfizer-BioNTech, and other manufacturers. and that will totally disrupt our supply chain within days.

Mr Osborn, who is also president of the Association of British Pharmaceutical Industries, said the vaccine programme had demonstrated the strength of the UK bioscience sector, and the benefits of cooperation.

“It has given us a model, centred around collaboration across government, industry and the NHS, that we can build on in the decade to come.

“It gives me great optimism that illnesses such as cancer, Alzheimer’s, cardiovascular disease and chronic pain can now be solved with a new approach, centred on a sense of mission.”